I am writing this blog with my good friend Jeff Haas about health and wellness. We both are extremely passionate and enthusiastic about health and lifestyle modification. We want our readers to take one thing from each blog to make themselves more healthy! 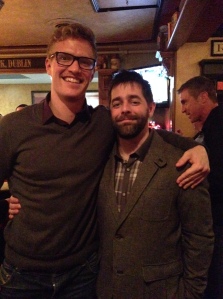 Justin McGinley and I

A little about myself I was born in Erie, Pennsylvania and lived there until I was 12 years old. When I was 12 my parents decided that for the sake of me and my two younger brothers it would be best if we moved to Sarasota, Florida. After living there and playing three sports for about six years I graduated from Riverview High School in 2004 as a two sport athlete (Baseball and Football). I received a combined academic and athletic scholarship (Baseball) to attend Limestone College in Gaffney, South Carolina. I graduated in 2008 with a double major in Biology and Chemistry with a minor in Mathematics.

After graduating I returned home to Sarasota, Florida where I worked for a year in Marketing before going back to medical school. I attended medical school at Lake Erie College of Osteopathic Medicine in Bradenton, Florida. I graduated medical school in 2013 and I have been training in the Kennedy Health System in Southern New Jersey for the past year and a half. I am currently in my second year of a Family Medicine Residency. I am very active in the Local Crossfit Communities and I am making strides toward helping fight against childhood obesity.

When I moved to New Jersey I met Jeff at Crossfit Aspire. We became good friends after working out with each other for a few months. He is an extremely well versed and driven individual that was hired to the American Honda Corporation in Torrance, California. Since his move we decided to collaborate on ideas we both shared in nutrition and lifestyle modification.

Stefania is an aspiring dentist, who recently graduated from Rutgers University with a BS in Exercise Science, and a BA in Psychology. She is currently pursuing her Masters of Cell and Molecular Biology at Tulane University.

During her time at Rutgers, she was a full-scholarship recipient on the Women’s Tennis team. While on the tennis team, she had an active role in multiple leadership organizations and received multiple accolades for her academic prowess.

She is fluent in both English and Romanian. Stef is extremely motivated, excelling both on the tennis court and in the classroom throughout her undergraduate years. I feel extremely grateful to have such a talented woman putting the finishing touches on all of my blog posts!

The most important relationship of your life!

weekly paleo recipes, health tips, and more from a couple on the go

Everyone has different thoughts about different things - that's what keeps it entertaining!

The new school Doc for the old school problems!

a buffet of cultural cuisine